India Economy will Grow at 8-10% GDP in next 5 year as par latest survey, Moody’s change the prospect of Indian Economy from normal to positive  but there is much fear , much risk as par past experience of trade in stock market.

Every One know market is work as per economy cycle of “PEAK, SLOWDOWN, RECESSION, and UPSWING”. As par the past data at time of “RECESSION” most of Retail trade , HNI trade , FII trader etc. losing Millions of Rs. in market. If we see the past data of “ECONOMY CYCLE”  recession comes at every 8 year.

Starting from “1982-83” due to a tight monetary policy to control inflation and sharp correction to overproduction of the previous decade.

This was followed by Black Monday in “October 1987” when a stock market collapse saw the Dow Jones Industrial Average plunge by 22.6 per cent affecting the lives of millions of Americans. The “early 1990s” saw a collapse of junk bonds and a financial crisis.

The US saw one of its biggest recessions in “2001”, ending ten years of growth, the longest expansion on record. From March to November 2001, employment dropped by almost 1.7 million. In the 1990-91 recessions, the GDP fell 1.5” per cent from its peak in the second quarter of 1990.

This was followed “21 January 2008” due to Trade imbalances and debt bubbles, Monetary policy, High private debt levels, Pre-recession economic imbalances, Housing bubbles, Ineffective or inappropriate regulation. Now if we see next 8 year from January 2008 to till now economy growth was very fast but as per the “ECONOMY CYCLE” this time is recession time in India (2015-2016) but still now No any Variable seen regarding Recession.

If you See below Picture (Bloomberg News ) say this is time of recession but there is some serious step taken by government, from the diagram we can see UK, South Africa , Japan, US. all country now on upswing and other country like East Asia, Canada, China, Korea, “INDIA”. all are make U-turn from Recession line so it’s good sign for world Economy. 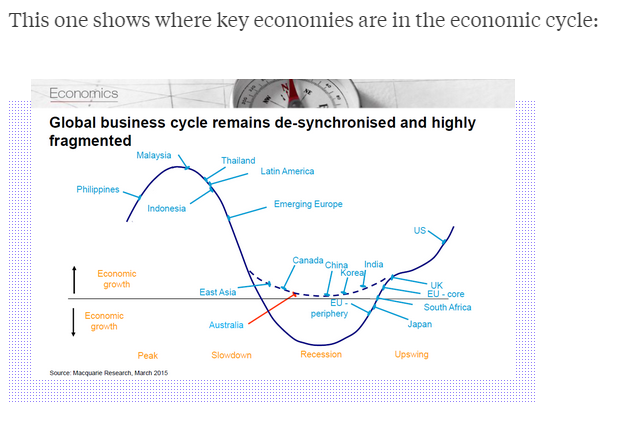